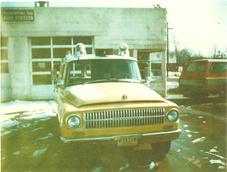 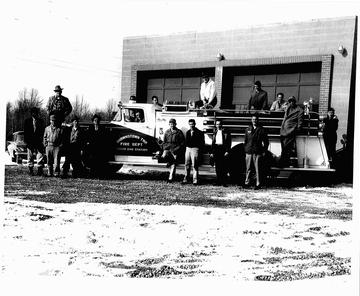 About Us and the History of the

View Names of Past Members of the Department

The Brownstown Fire Department has been in existence since the early 1960’s.  The Township was originally 42 sq. miles, which included Flat Rock, Rockwood, Gibraltar and Woodhaven. The first fire apparatus for the area were 1947 Buffalo pumpers located in Rockwood and Flat Rock.  Flat Rock provided fire protection for everything north to Pennsylvania Road within the north end of Brownstown and Rockwood covered everything to the east within the South end of the Township.

The first fire station in Brownstown was built on Sibley Road in 1960-61 and volunteers were recruited at that time.  This site is where the current Fire Headquarters is located.

In 1978, the first full time chief was hired (Don Hermman) shortly after

was later replaced by Chief Larry Garrow in 1984 after his retirement.

position as a police officer with the Brownstown Police Department in

Station #1 housed the first Fire Pumper, a 1960 Ford with 1000 gallon tank of water and 500 GPM pump.  This was built by American Fire Apparatus in Battle Creek, MI.  Station 1 is also where the emergency calls for the Township were received and dispatched.  Station 1 was replaced with a state of the art building in 1996 which incorporated the fire headquarters, classroom training facilities, and overall larger drive through bays to house the newer fire equipment.  In 2003 an addition included sleeping quarters, kitchen and day room to facilitate the all full time members of the department.

Station #2 was opened in 1971 in an old gas station on West Jefferson.  It housed a 1942 Mack and a 1964 International pumper with 500 GPM pumps.  A new station was eventually built further north along West Jefferson in 1984.  This station is located in front of the Lake Erie Metro Park main entrance.

Station #3 Opened in 1977 on Gibraltar Road @ Allen.  This station was Refurbished 2009 adding longer drive through bays, sleeping quarters, kitchen and a day room.

Station #4 opened in 1979 on West Road west of Beech Daly and this authorized the number of firefighters for the department to be set at 125 members.   At one time the Brownstown Fire Department was known to be one of the largest volunteer fire departments in the state.

This station also served as the first fire headquarters for the full time chief and fire marshal.  Dispatch operations were also moved to this location at that time which remained until 1982 when they were moved to the new Police Station within the Township Hall Building.  At that time the dispatch operations were expanded to include dispatching for the newly formed police department.

The department, on several occasions throughout its early inception, would host a Fire Cadet Program where high school kids interested in the fire service could join the program and learn about the many aspects of being a firefighter/EMT.  This program included both hands on training and classroom learning similar to what the volunteer firefighters received.  Many cadets were certified in CPR.  Cadets were permitted to ride along on runs and help out at fire scenes with clean up and getting the fire units back into service.  Cadets preformed station chores, participated in Goodfellow activities, maintained clearance of fire hydrants during heavy snow fall and participated in other fire department functions.  Many of the former cadets went on to join the department as a volunteer/paid on call firefighter/EMTs, with some eventually becoming full time firefighters with this department or other full time departments in the area.  Some of those cadets  went on to be officers of the full time department and one serves as its chief.

Brownstown was the first  Downriver Community to have the Hurst “Jaws of Life”.

The fire department began basic life support transport of patients in 1989.  At that time, a used 1985 ambulance was purchased from a local auction.  This unit was placed in service at Station #1 on Sibley Road and provided basic EMS care and transport to local hospitals.  Prior to this time all patient transports were provided by local private ambulance services when they were available.

In the year 1999, preparations were being made after a dedicated 2 mill fire mileage was approved by the citizens to convert the department from a paid on call agency to a full time staffed 24/7 fire and EMS agency.

In October 2000, The department began staffing 2 stations 24/7 with a minimum of 4 personnel in each station.  At that time, the full time inspector (Mark McLain) was made an assistant chief and a second assistant chief was hired (James Katona). Shorty thereafter 18 full time and 6 part time firefighters were hired.  Eventually the part time employees were made full time, phasing out the part time positions. as well as dissolving the Paid on Call members.  The department grew over the next few years with today having 30 firefighter/medics.

The Sibley Road and Gibraltar Road Stations each respond with an ALS transport ambulance and an ALS Engine, providing 99.9% ALS first response to all medical calls within Brownstown.  All department personnel from the Chief to newest recruit is a state of Michigan Licensed Paramedic.

In 2009, the department began using CAD (computer aided dispatch) to receive additional call information from the dispatch center.  This CAD allows for real time interaction to the call information and data time stamping as well as any site alerts or special attention notes.  The CAD also integrates call location mapping and AVL of other units in service and responding to incidents.

In March 2012, the department was equipped with 12 lead EKG telemetry units, which allows our field medics to attach a 12 lead EKG to a patient at the emergency scene, interpret the heart condition along with a computer verification and then transmit that EKG to the local awaiting emergency room physician.

In August 2016, the department added an additional resource tool to our emergency response.  Active911 is a digital messaging system that delivers alarms, maps, and other critical information instantly to first responders. Active911 also allows response efforts to be monitored in real time. This information is automatically pushed from our dispatch centers computer aided dispatching software, This is an app that is deployed to the department's shift and command officer's smart phones and to I pads within the fire apparatus, as well as large display screens within the fire stations.  With this newly added tool it helps improve call out time and improved location awareness.  It also allows for added located information, such as pre-plans, fire hydrant locations, hazard locations, special attention locations, key box locations, building and residential access codes, and much more information.